One well-known person in Port Maitland in the 1950's and 60's was Frank Smith. Frank was born around the end of World War I, about ninety-five years ago. From the time Frank was a baby, people knew that he was different. The word people used to describe Frank then was "retarded". Retarded meant didn’t learn quickly or didn’t learn as much as other people. In those days children like Frank didn’t go to school. As Frank got older, he wasn’t trained to do any job, so he was never able to work very much. However, Frank could split and pile wood as well as anyone and, from time to time, he earned a little money that way. Frank was not too happy with the "brown" money - pennies. But he did love the "white" money - nickels, dimes or quarters - because then he could buy ice cream.

Frank lived at home with his parents until they got sick and died. Now back in those days there weren’t group homes, or special programs, or disability cheques. In fact, there was almost no help of any kind for someone like Frank.

Somehow the brothers made this plan to look after Frank. Frank began each month sleeping overnight and having breakfast at one brother’s house - say Edward’s. After breakfast Frank went to John’s for lunch. Later he had his supper at Bernard’s. Frank continued like this for the month, then everything rotated. On the last day of the month Frank could be seen walking along the road with his suitcase, moving from one brother’s home to the next.

When he wasn’t at one of his brother’s, Frank spent his time visiting. He walked through the village from one end to the other every day and he soon learned the businesses and homes where he was welcome. He stopped to visit at Les Delaney’s garage on Highway 1. He dropped into George Sollows’ store down by the wharf. One day when Frank walked in, somebody called out "Here’s the man that makes the wind blow." "Let her howl" replied Frank.

Andrew Bingay was another store owner who welcomed Frank and was usually kind to him. One day, though, Mr. Bingay and his son-in-law, Tim, saw Frank go into Mr. Bingay’s outdoor toilet, so they decided to play a little trick on Frank. Quick as a wink, they shut the latch on the toilet so that Frank was stuck in the small wooden building. Then, BANG. Before anyone realized what was happening, Frank kicked that door and sent it flying. Mr. Bingay and Tim were left to repair the outhouse.

Another time, some men from Tusket were in Port Maitland selling fish. They offered Frank a drive in their truck, but when the time came to let Frank out, they refused. Before they had any idea what was happening, Frank braced both feet on the windshield and pushed with all his might. It seems that all his walking throughout the village each day, and all the wood stacking, had made Frank pretty strong. That windshield didn’t stand a chance and Frank was soon going about his business.

Frank was a regular visitor at George and Marjorie Snow’s. Frank would happily sit and rock in the rocking chair in the kitchen while Marjorie cooked, or knitted, or sewed. Now Frank had a sweet tooth and Marjorie realized that Frank liked to have a cookie or two as he sat and rocked. Marjorie was very generous with her cookies. In the evenings George was in the kitchen knitting pot heads for his lobster traps, or talking on the phone with people who called with problems. Trusty, the dog, spent time there as well, in fact the kitchen and playroom were the only parts of the house that Trusty was supposed to be. Neighbours came and went. Snows’ kitchen was always a wonderful, warm, friendly place to be.

Susan, Howard and Roddy were always in and out too. Roddy Snow had a table hockey game which he played constantly and became so good at it that nobody could beat him. But when Roddy played hockey with Frank, because Frank was so very delighted to score a goal - he clapped and hooted and beamed from ear to ear - Roddy always let him win.

One summer Marjorie’s sister, Jean, was visiting from Montreal and she arrived before the Snows had returned from a camping trip. One particular day while the family was still away, Jean was home alone and upstairs. When Jean came down to the kitchen, she was taken aback to see Frank sitting in the rocking chair.

Jean knew nothing about Frank, nor his sweet tooth, nor his love of cookies. Frank just sat and rocked. Jean tried to explain to Frank that the Snows were away and weren’t expected very soon. Frank rocked on. Nothing Jean said to Frank seemed to make any impression. Frank rocked and he rocked. Finally, Frank left, not too pleased. Now Jean is a lovely kind woman, it’s just that being from Montreal, she wasn’t used to visitors showing up to sit and rock and eat cookies.

Frank loved Christmas and, when Frank was happy about something, he was just full of glee. At Christmas the people of Port Maitland were especially kind to Frank. They knew Frank liked a bit of money and he also loved pictures of Santa Claus. So, even when times were hard, Frank might receive a dozen Christmas cards, most with a picture of Santa and many with a one dollar bill inside. 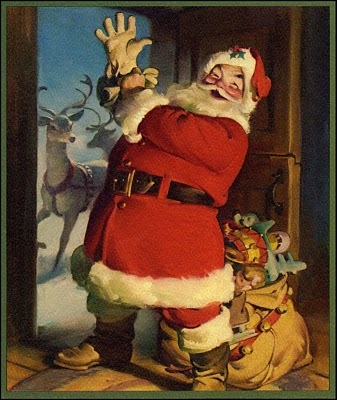 Frank was never considered an important person during his lifetime, nor would he be considered important by today’s standards. Frank had almost no money. He didn’t own a house, or even rent one. He had no education. He wasn’t good looking and his teeth weren’t the best. He wasn’t charming or even a good conversationalist. Maybe Frank didn’t learn quickly, or didn’t learn as much as other people. But Frank understood important truths that even the most highly regarded among us never learn. Frank understood very clearly that his family would always be there to look after him. His friends added warmth and richness to his life. And Christmas was a time of love and joy all wrapped up to look like Santa Claus.

By Howard and Madeleine
Christmas 2012

As usual, we are very thankful for help from George Snow, Charlotte Delaney Covert and Susan Snow Moores. We are also most appreciative of Chris and Sarah Snow’s work in making the web site.